Will China make good of its latest promise to give private firms more access in a market that favours the state sector?

China’s private sector, the driving force behind the country’s economic miracle over the last 40 years, is struggling amid the Chinese government’s campaign to reduce national debt and the trade war with the United States. This is the third story in a series that will detail the challenges private firms face and outline the government’s attempts to address them.

In late October, the profit-losing state-owned automaker FAW Group received a 1 trillion yuan (US$145 billion) credit line from 16 of China’s biggest lenders, at the same time that Beijing reiterated its promise to grant the private sector that accounts for more than 60 per cent of the Chinese economy with more loans and market access to stay competitive.

The harsh reality of what private firms are up against, from access to preferential policies and subsidies in doing business to financing, is telling not just in the auto industry but across numerous sectors that SOEs traditionally dominate. Last year, most of the 28 million cars sold in the world’s No 1 market – which is opened to private and foreign companies – were produced by state-owned manufacturers, as were China’s top five carmakers, according to official data and PwC. Less than 1 per cent of cars were imported from the US. 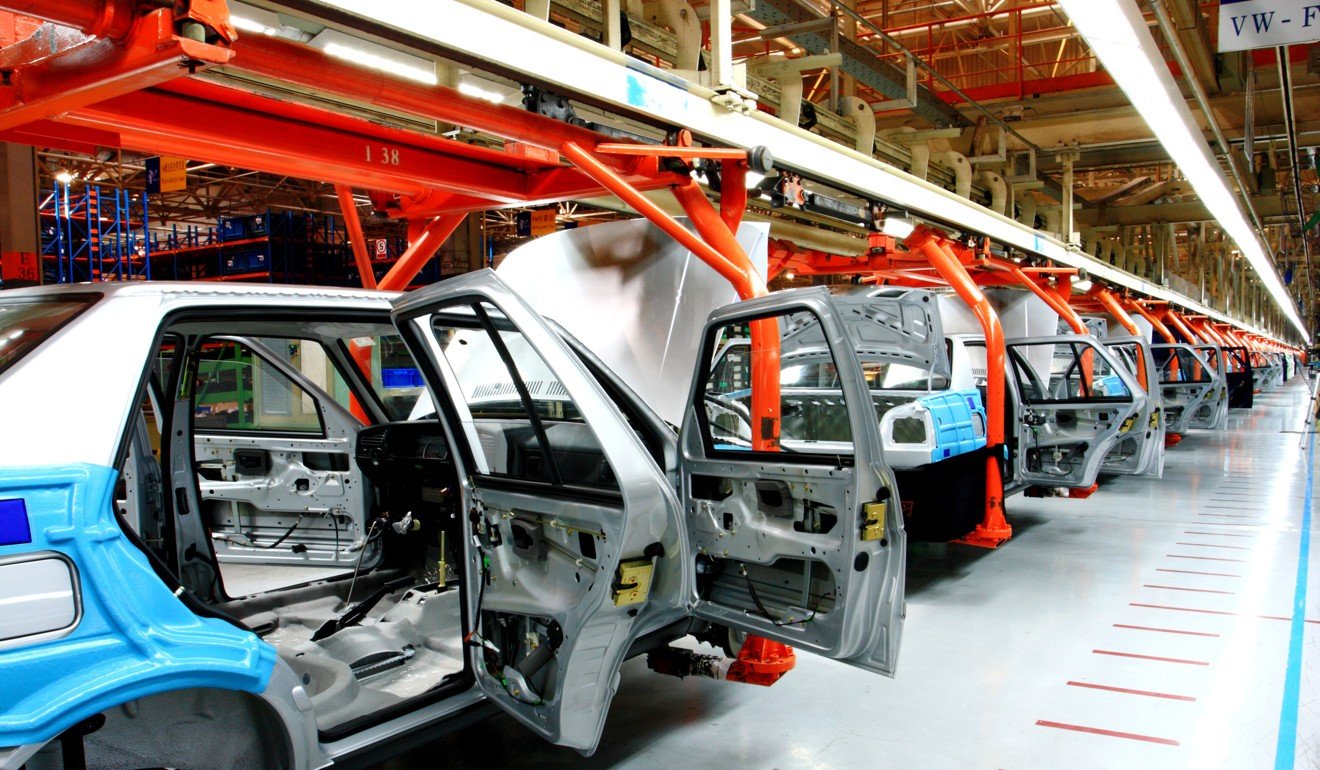 “In China, I think it’s difficult to have it all,” said Larry Hu, chief China economist at Macquarie.

“China goes through phases [when it comes to policy support]. For a while it favoured state firms more, there were times it was private firms,” he said.

Keeping a tight leash on its most strategic and lucrative industries would foster the communist ideological premise pushed by Chinese President Xi Jinping, even as the government steps up its charm offensive to win over the private sector to help buffer the slowest economic growth pace in a decade.

China’s build-up of its economic might is owed to the overhaul of its state economy in tandem with forces of private ownership since reforms began in 1978 despite the inequity that remains.

“Since the current leadership has taken over, it’s started a new wave of pushing the private sector back in favour of the state,” said Zhang Lifan, a prominent scholar of modern Chinese history in Beijing.

“It’s a regression back to Mao’s era. Many private firms are facing hard times and are not willing to carry on with their businesses.”

Whether China will make good of its latest round of promises to the private sector is plausible.

As early as 2005, the State Council had published a directive to promote growth in the non-state sector, followed over the years by other documents and rhetorics with similar objectives. At the November 2013 Third Plenum, the Chinese government announced reforms to state firms that included selling shares of SOEs in traditionally state monopolies like energy, telecommunications and finance to non-state entities. 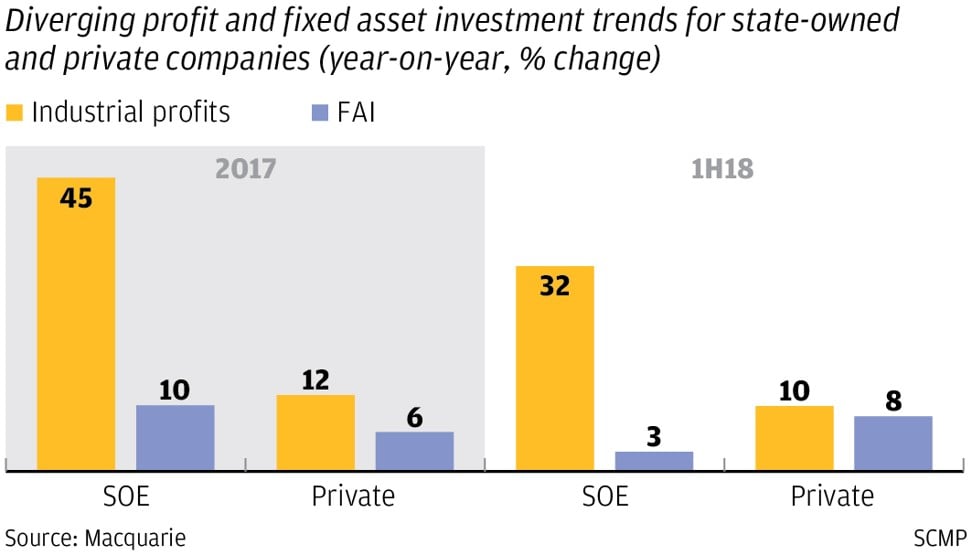 To shore up their confidence, President Xi told private entrepreneurs last month that their businesses would be protected, and the government would try to find new ways – such as tax cuts and bailout funds – to do so. China’s powerful state planner the National Development and Reform Commission said the private sector would be allowed more access to the mixed ownership reform plans with further easing of investment restrictions in the transport, energy and environmental protection industries.

Such measures however, an incarnation of what was pledged in 2005, also raise the question of their effectiveness. What has been evident over the years, analysts said, was the government’s preference to consolidate the state sector rather than allow non-state firms to compete in traditional industries that SOEs hold a large share of the pie – heavy weights like aviation, defence, energy and telecommunications, as well as shipping that are seen strategic to national security and development.

Take the energy industry, in particular the capital-intensive upstream, or exploration and production segment, which is dominated by three state-owned giants: CNPC, Sinopec and CNOOC.

It’s a regression back to Mao’s era. Many private firms are facing hard times and are not willing to carry on with their businesses

Oil resources are state-owned and refineries will need to apply for permits from the State Council, or the cabinet, to explore and extract them. Even though auctions to bid for mining rights are open to private firms, they must have a minimal 1 billion yuan in net assets to be eligible.

Mikkal E. Herberg, research director of National Bureau of Asian Research’s Energy Security Program in the US, described China’s upstream oil and gas reform effort as “one and a half steps forward and one step back”.

“The leadership understands there is a need to have more competition to become more efficient in a technologically innovative industry,” said Herberg.

“Ultimately, it’s a very difficult process because it implies losing control. They’ve talked about mixed ownership and made those commitments. But what has actually happened in reality, under Xi, there’s little progress. It’s mostly window dressing,” he said. 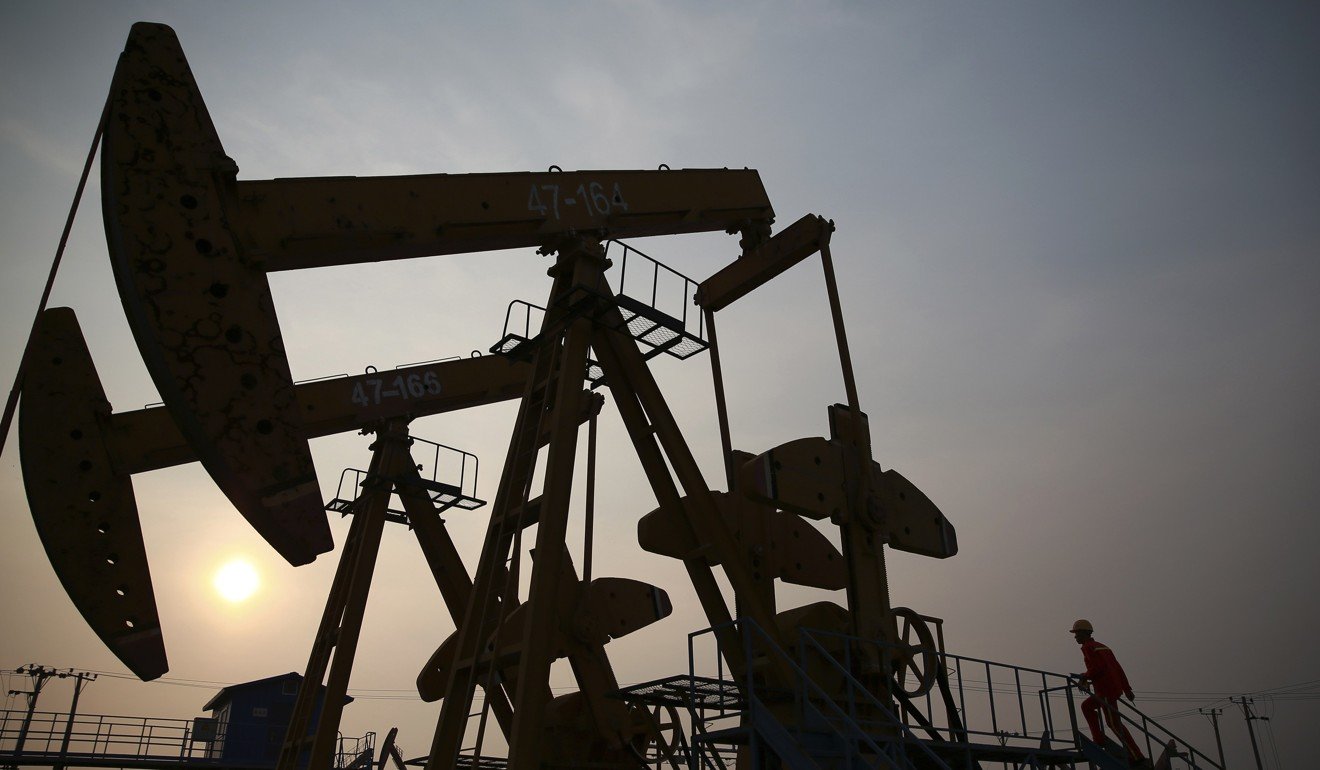 So far, the closest that private oil firms have come was to establish joint ventures with the state oil producers or provide services to them, like Anton Oilfield Services Group. Another service provider Honghua Group was sold to state-owned China Aerospace Science and Industry Corp to help it return to profit after years of losses.

What does ‘opening up’ exhibition giving credit to SOEs and Xi Jinping say to China’s private firms?

Conversely, China has imposed fewer constraints in new economy sectors that state firms have less or minimal expertise, where private businesses have flourished.

One area, for example, is the medical payment business in the health care industry. The government’s push in recent years from a per-head costing system to a mechanism that categorises patients by diagnoses based on disease groupings has allowed private firms to offer services in collecting huge amounts of data and in the payment process, which included subsidies that mainland hospitals received from the government for certain treatments. 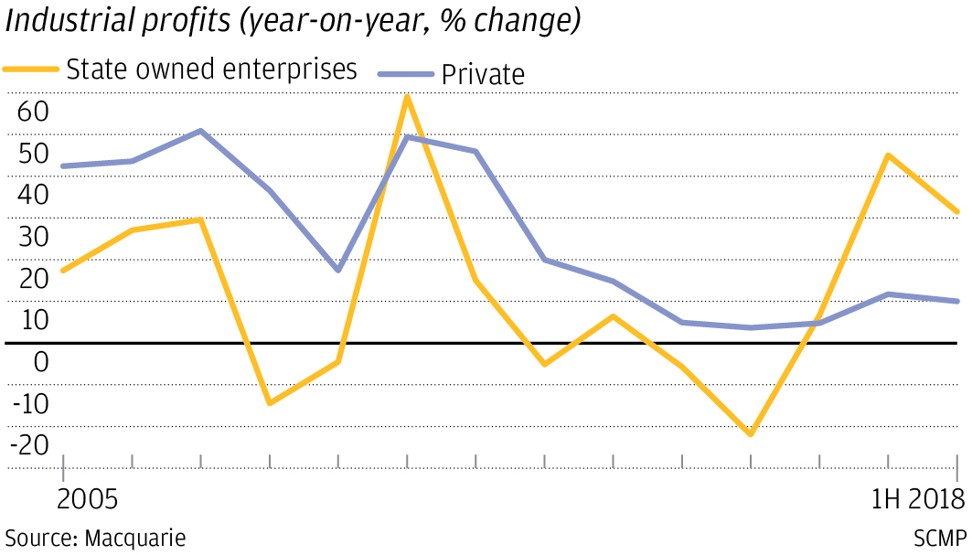 “We understand it [Beijing’s latest reform measures on market access] means there would be more opportunities for private companies like ours in public service businesses, like medical payment system, which used to be run by state firms,” said Jiang Zhongyuan, founder of IHDpay Group, a start-up in fintech and big data on health care that focuses on the Greater Bay Area.

“We have also seen the [Guangdong] provincial government launched detailed measures, including the schedule and conditions, to reduce costs for local enterprises and lure more foreign investment. It helps us build up confidence to expand our investment in the region for the long term.” 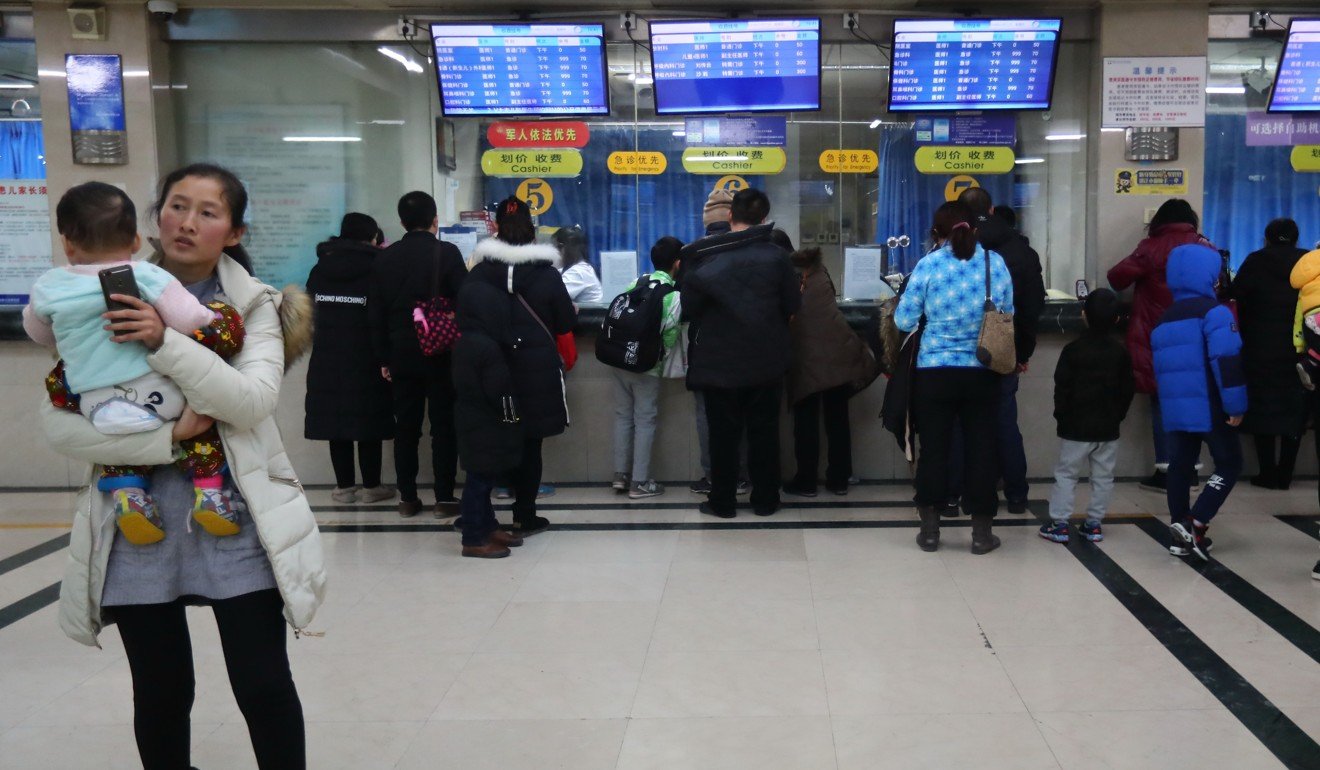 To be fair, governments of market economies in the West also maintain a major role in sectors, such as transport, to protect the interests of their citizens. In Germany, railway operator Deutsche Bahn is a private company with the federal government as its single largest shareholder.

“On one level we shouldn’t be overly critical of China,” said George Magnus, a research associate at the University of Oxford China Centre and author of Red Flags: Why Xi’s China is in Jeopardy.

“Maybe they don’t want private or foreign firms involved in highly sensitive military and technology areas any more than we do in other countries. That’s a level playing field.” 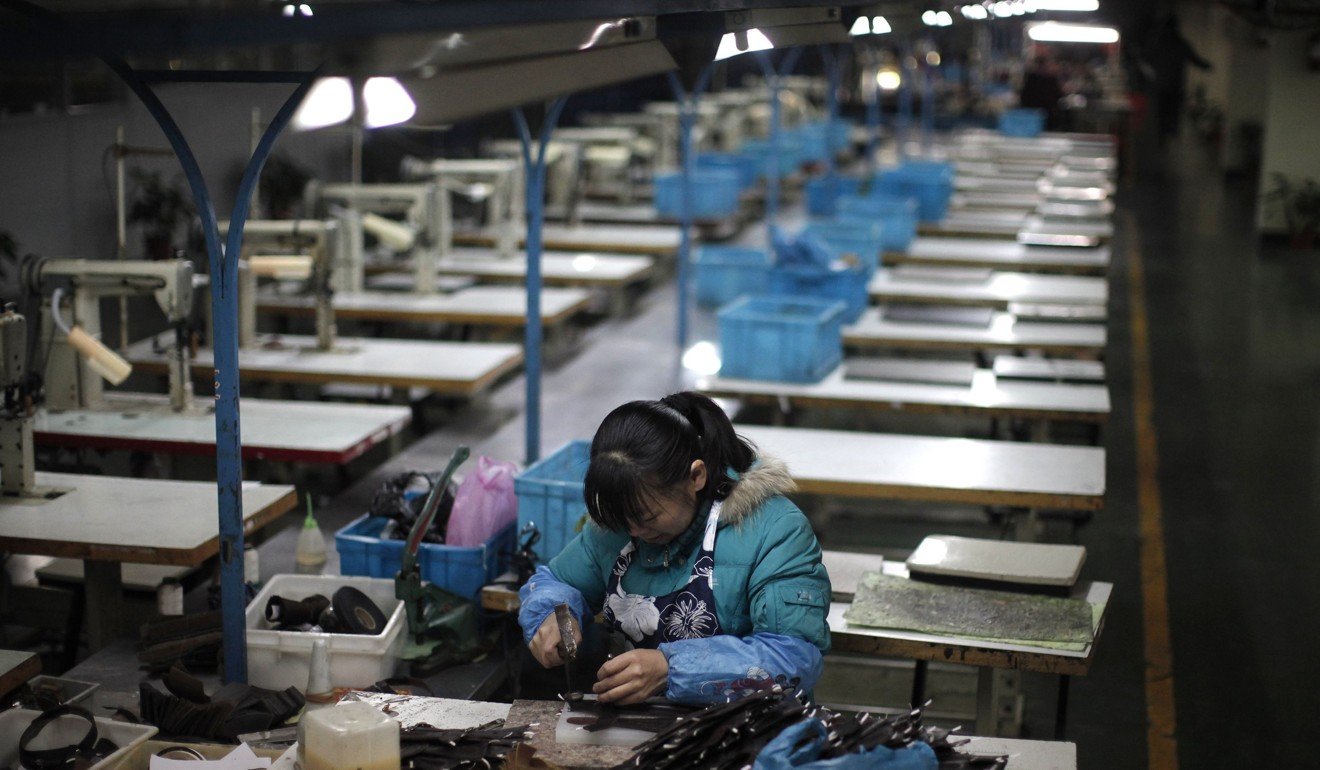 In recent weeks, China, to address complaints from US and Europe over the role of state firms, has touted the idea of “competitive neutrality”. Under the concept, companies of different shareholding structures can compete fairly through improved transparency in policies that ensure equitable treatment in areas such as subsidies, taxes, trade instruments such as tariffs, and other support mechanisms, and reforming them where they unnecessarily distort competition. But no details have been made available.

Meanwhile, with funding costs rising amid the mainland’s credit crunch and the effects of the US-China trade war biting, the private sector is facing a tougher time than 2015, when the world’s second largest economy was crimped by slackening growth and a stock market meltdown.

“Market access will help [the private sector],” said Macquarie’s Hu. “But are they [new measures] going to meet the expectations [of having a level playing field]? I don’t see it happening yet.”

Additional reporting by He Huifeng

Decline in jobs and incomes eases as coronavirus restrictions begin to lift, ANU…