China wants consumers to drive economic growth, but they are already being squeezed

Yu Mingang had a good job helping Chinese manufacturers prepare to sell shares to the public until the cooling economy derailed those plans.

As demand for auditing services sank, the 25-year-old accountant in the eastern city of Hangzhou was laid off in December. Yu tightened his belt: No more trips to the cinema or eating out. He put off buying a computer.

“I pay rent out of my savings,” he said.

The downturn is squeezing urban workers and entrepreneurs the ruling Communist Party is counting on to help transform China from a low-wage factory into a prosperous consumer market.

Is China wise to bank on consumer spending to drive economic growth?

Headline economic numbers still look healthy. Growth in 2019 is forecast at more than 6 per cent, down from about 6.5 per cent last year, but it is propped up by higher government spending, which masks sharp declines in other areas. Those are spooking the public and discouraging spending, which could make the downturn worse.

A tariff war with Washington over Beijing’s technology ambitions is adding to anxiety over job losses and tumbling sales of cars, homes and consumer goods.

“I am worried about my job security and have cut spending on everything including clothes, holidays and changing smartphones,” said He Siying, who works for an investment consulting firm in Beijing.

He, 32, was rattled when friends were laid off. One found a new job but the employer wanted her to work six days a week.

“I really daren’t spend much,” said the mother of a one-year-old son.

That anxiety is hitting China’s trading partners and global companies that increasingly count on Chinese consumers.

Apple, General Motors, jeweller Tiffany and others say sales are down. Car purchases shrank in 2018 for the first time in three decades. Japan and South Korea report lower exports of components for smartphones and other electronics sold in China. 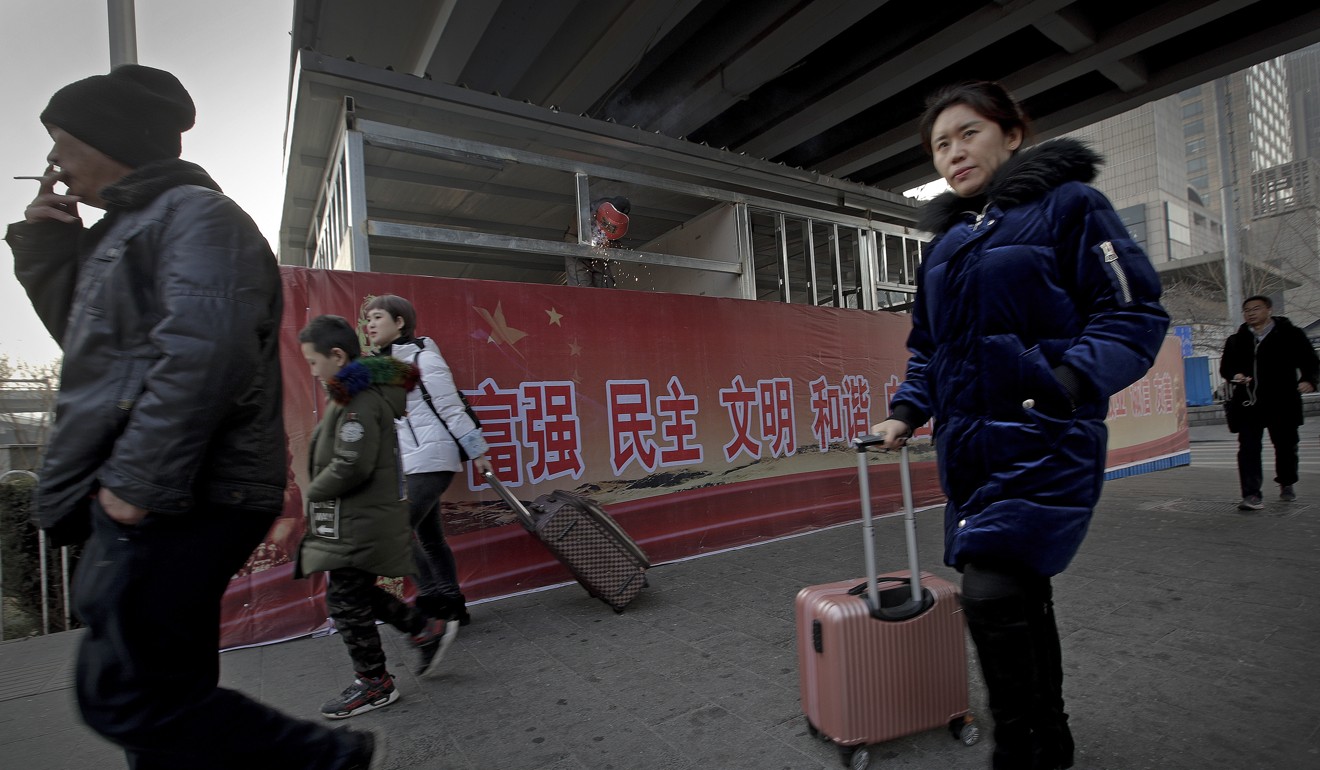 The decline in economic growth that peaked above 14 per cent in 2007 is partly intentional. Regulators clamped down on lending in late 2017 to cool a debt boom. But the downturn was sharper than expected.

The private sector has been hit hard.

“Many people have been laid off. People are having a hard time finding a new job and are panicking,” said Summer Li, a 28-year-old product manager for an electronics company.

Yu, the Hangzhou accountant, said he lost his 100,000 yuan (US$14,700) a year job after demand for auditing services fell by a third. Clients put off plans for stock market listings after profits sank below the level required by regulators.

“It happened due to the bad economic situation,” he said.

The ruling party promised in 2013 to support entrepreneurs who create China’s new jobs and wealth. But reform advocates complain President Xi Jinping’s government has instead focused on expanding state-owned companies that dominate oil, banking and other industries.

Jolted by the deepening slump, Xi and other leaders have pledged to help private business by cutting taxes and regulation.

How far should China go to stimulate the economy? That’s a question for Xi Jinping in 2019

Exports to the United States held up through late 2018 despite President Donald Trump’s tariff hikes, but sales shrank 3.5 per cent year on year in December as those penalties started to hit demand.

Jittery companies and consumers already were putting off investments and big purchases.

“Consumer confidence is weaker and uncertainty has increased. The US-China trade war is feeding into that,” said Rajiv Biswas, chief Asia–Pacific economist for IHS Markit. “That is obviously a risk to the growth outlook for 2019.”

The slowdown is adding to pressure from wrenching changes in jobs and industry that already were under way.

The ruling party has wiped out millions of steel and coal mining jobs in a marathon campaign to shrink those bloated state-owned industries.

China revises down 2017 economic growth rate to 6.8 per cent ahead of announcing 2018 GDP figures

Since 2017, Beijing, Shanghai and other big cities have forced out migrant workers who lack official permission to live there. Local leaders said they wanted to reduce crowding, but restaurants, retailers and other companies depend on migrants as employees and increasingly as customers.

The sales manager at a Beijing showroom for one of China’s biggest carmakers said sales had halved. He blamed the departure of migrants who buy lower-priced models starting at 50,000 yuan.

“Many such customers returned to their hometowns because there wasn’t much work for them,” said the manager, who asked that he and his employer not be identified by name. “Sales of high-end cars also plunged because the buyers own businesses serving migrant workers.” 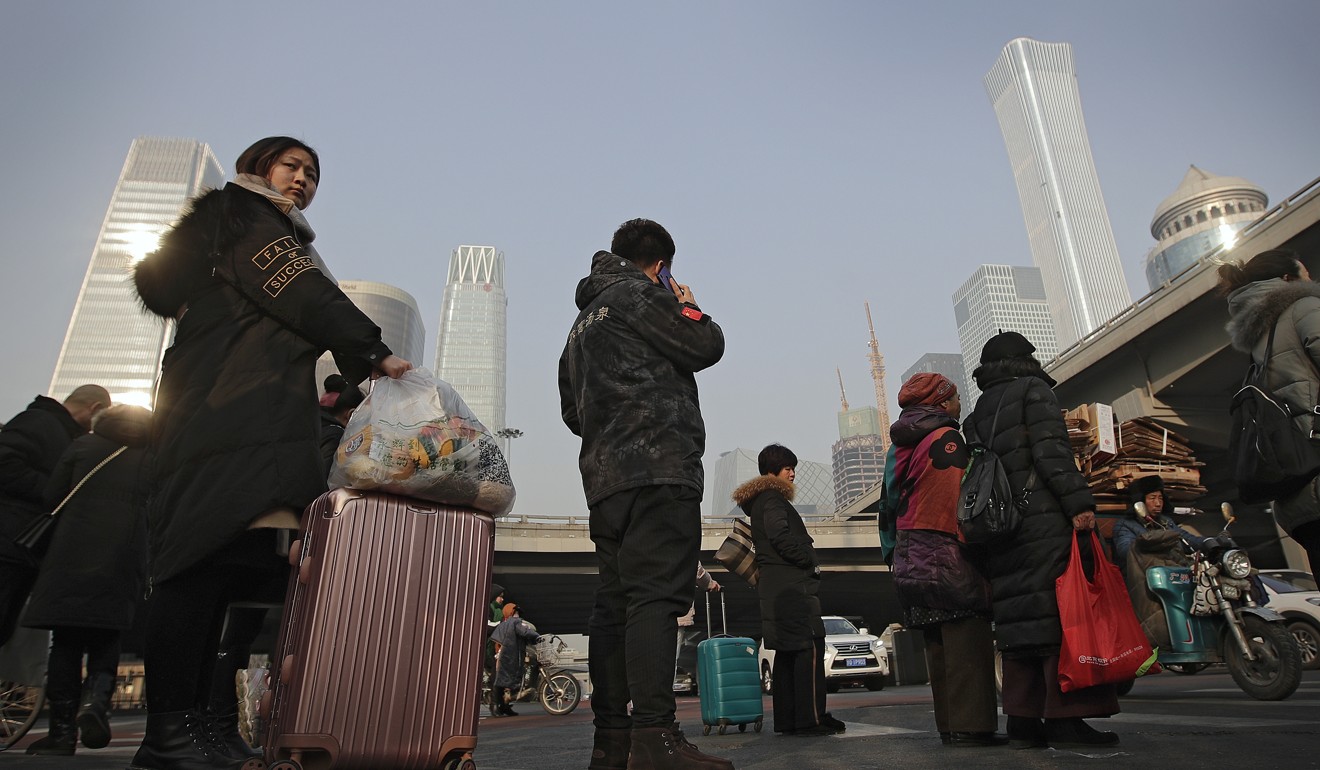 Overall, disposable consumer income rose by 5.7 per cent in the first three quarters of last year, but that was down from 6.6 per cent in 2017. Retail sales growth in November fell to a lower than expected 8.6 per cent year on year, its weakest rate in five months.

Construction, the industry that powered China’s boom in past decades, is also struggling.

Some cash-strapped developers in China’s northwest have resorted to paying contractors by giving them flats, according to Anne Stevenson-Yang of J Capital Research, a financial research firm.

The contractors hoped to sell later, but some developments were three-quarters vacant, she said Stevenson-Yang.

The owner of a Cantonese restaurant in southwest Beijing said she wanted to give up and return to her hometown near Shanghai but could not find a buyer for the business.

“I am making a profit but can’t earn a lot from it,” said the owner, who would give only her surname, Yue.

Economists expect the downturn to bottom out this year as government stimulus gains traction. But cautious spenders like Paige Fu, an assistant to the general manager of a company in the film industry, are wary.

“I worry the economy will keep sliding,” she said.

Decline in jobs and incomes eases as coronavirus restrictions begin to lift, ANU…

‘We’ve kicked the can down the road’: Australian businesses brace…