In a recent off-the-record media gathering with senior executives of a Shenzhen-based, but Hong Kong-listed, company with an international business portfolio, its founder shared with us his insights on China’s economy.

The highly respected mainland tycoon, who built his business empire from scratch in the early 1980s and is now one of the country’s most prominent pioneers in the private sector, told us it was natural for mainland China’s economy to slow down because there was no such thing as perpetual high-speed growth anywhere.

So he saw the latest official figure of 6.6 per cent GDP growth as a healthy adjustment, and suggested it could even drop to 5 or 4 per cent in the years to come. But he was not worried.

“Even if we lose the US market if the trade talks eventually fail – though we never want to see that happen – we’ll still survive,” he said. “My company has been expanding into Europe and we already see progress. Meanwhile, there is still great potential in the home market.”

A few days later, I had the chance to meet the chairman of a Hong Kong-listed international company, who shared similar confidence.

He said his group, which has a long history with both the mainland and Hong Kong, had witnessed many upheavals and undergone numerous bad times over the years, but had never given up.

Xi Jinping has issued a rallying cry, but what is China on alert for?

He saw the current US-China trade war as “just another bad time”, even though the worst could be yet to come.

His strategy follows the Chinese philosophy of “coping with changes with consistency”, which means sticking to the company’s core business without shifting direction, while preparing for all possible risks.

That, perhaps, is more common sense than something extraordinary, but interestingly echoes a popular term President Xi Jinping recently reiterated – “bottom-line thinking”, referring to the methodology or approach of fully assessing various kinds of financial risk for better allocation of resources and decision making. 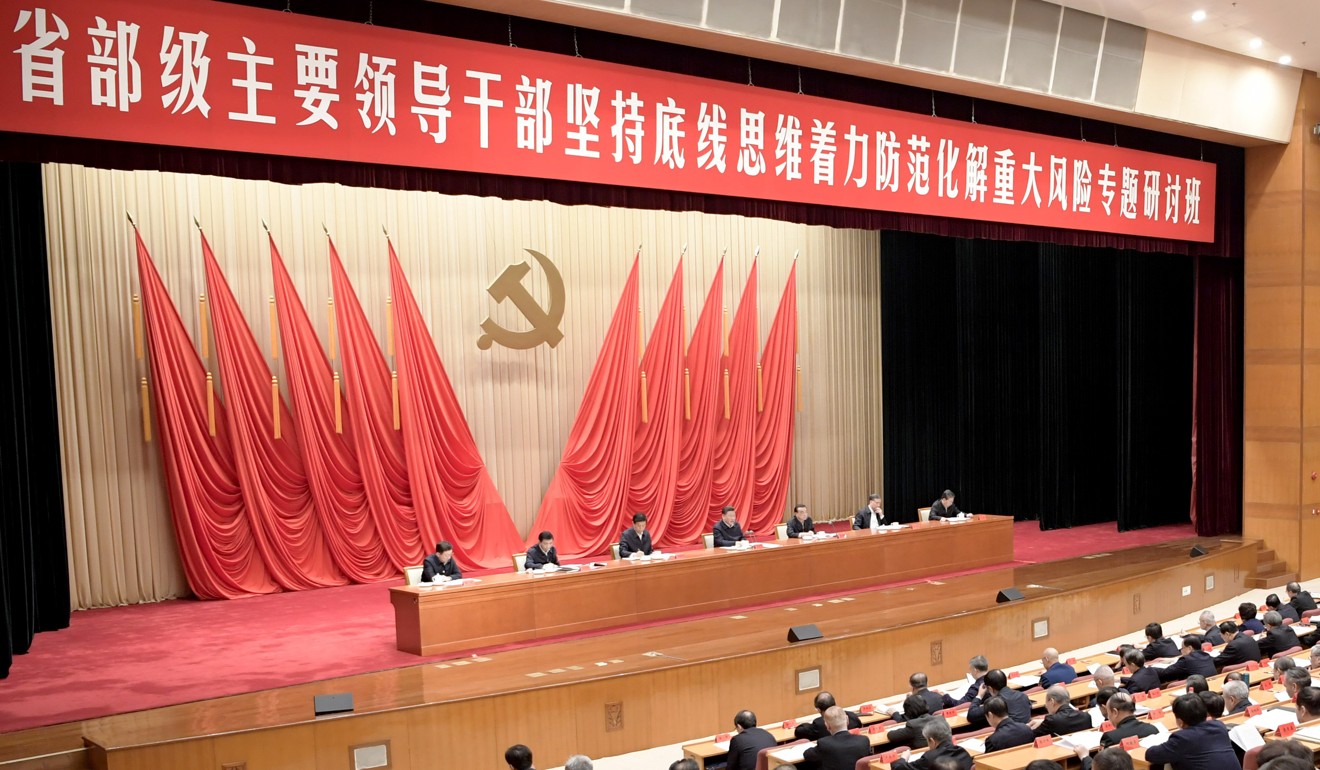 Academic as it is, it has become one of Xi’s catchphrases since he took power in 2012. But his latest emphasis on it prompted a big question: is China’s economy in serious trouble, or still on the right track?

Ahead of a new round of crucial high-level trade negotiations in Washington between Vice-Premier Liu He and his US counterparts, there is no sign yet of any guarantee of an agreement.

It was against such a backdrop that Xi last week told senior officials from the provincial levels, summoned to Beijing for a study session, that they must always bear in mind this “bottom-line thinking” – to be vigilant for possible “black swans” and “grey rhinos”, given the unpredictable international environment China was facing. While optimists saw it as a timely reminder of the need to save for a rainy day, pessimists came to the conclusion that the world’s second-largest economy could be on the brink.

Amid all the uncertainties over China-US relations and the world economy, Hong Kong was ranked as the world’s freest economy for the 25th year in a row by American think tank the Heritage Foundation last week.

The government happily accepted it as a high compliment and recognition of the city’s favourable business environment, which is something that Hong Kong can indeed be proud of.

However, the city’s judicial effectiveness score dropped nine points this year, and 2019 has not got off to a good start for the government. Take, for example, the big political controversy over its decision to raise the age threshold for elderly welfare payments, which has yet to be defused.

An effective government needs to have the confidence to lead, but this is more of a time for bottom-line thinking for the administration regarding the potential political and economic nightmare scenarios ahead.

U.K. warns China: Do not destroy the jewel of Hong Kong

As WHO praised China for virus response, officials quietly steamed over lack of info